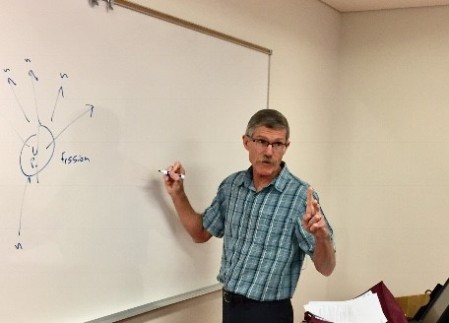 But inside the lab, scientists design some of the world’s most powerful weapons of mass destruction. One of them is chief scientist for global security Blake Wood.

Walking past Wood on the street, “nuclear weapons designer” probably wouldn’t be the first image that comes to mind. With his calm demeanor and well-trimmed mustache, he does not look like a man in the war industry. And perhaps he’s not: Wood believes his work does more to prevent war than start it.

“What I’m doing contributes to world peace,” Wood said in an interview. Nuclear weapons and world peace might sound like opposing forces, but Wood argues that the world is a much safer place with nuclear technology in it. “Since World War II, in 70 years since we used nuclear weapons against Japan, they haven’t been used again, and the existence of nuclear weapons has probably prevented major power wars since then,” he said.

The role of nuclear weapons and world peace is a long-debated issue. Wood’s perspective falls under a military theory called deterrence: states are deterred from using their nuclear weapons on adversaries because of the threat of nuclear retaliation. According to the doctrine of mutually assured destruction, if two powers use full-scale nuclear capability on one another, both states would be annihilated. No state wants that, so they refrain from actually using their weapons.

Nuclear weapons allow the world to avoid the bunker-style warfare of World War I, or the massive civilian loss of life that characterized World War II, Wood says. “As long as our nuclear weapons are sufficiently deployable, safe and accurate enough to provide a deterrence against our adversaries, that is a stabilizing force instead of a destabilizing force,” he said.

But some question how safe nuclear weapons truly are. “The idea that some people from some countries have the right to end the world if they want — that’s crazy. And we’ve just accepted it,” said Beatrice Fihn, a Swedish anti-nuclear activist and Nobel Peace Prize winner, in a speech reported by Pacific Standard Magazine. Fihn says it is unrealistic “that we keep nuclear weapons, continue to threaten to use them, exercise with them, and think that (nuclear war) will never happen.”

What concerns Fihn is not necessarily the theory of deterrence itself, but rather how easily the system could go wrong depending on who holds the power to deploy. “It would be all too easy to name Donald Trump as a rogue,” Fihn said as she remarked on the U.S. president’s October decision to pull out of the United States’ intermediate-range nuclear forces (INF) treaty with Russia. “The truth is that a system that one impulsive person or unpredictable person can uproot is not an appropriate security system in the first place,” she said in her speech.

Experts warned that Trump’s decision to quit the INF accord could bring about levels of nuclear escalation that the world has not seen since the Cold War-era 1970s and 1980s.

Wood is well aware of these warnings, and does think that it would be strategically and financially smart for the U.S. to reduce its nuclear stockpile. “We should pull down our nuclear capability by a few hundred,” he said. ”We should still hold at risk the things that Russians hold dear as a deterrent, but this way it is less expensive, it’s safer, and it’s just a better place to be.”

But while Fihn thinks that the United States and the world should ban nuclear weapons, Wood maintains his trust in deterrence. “I think we do not want to go to zero,” he said. He points to the fact that the total percentage of the world population killed by warfare has dropped since the creation of nuclear weapons as evidence for the overall benefit of maintaining a nuclear arsenal. “This comes at a cost, one of money and the danger of catastrophe,” Wood acknowledged. “But the world is better off with the existence of nuclear weapons than not.”

Wood says that he will only consider his job well done if nuclear weapons are never used. “If they were used,” he said, “then it would be to some extent a failure in the work that I do.”