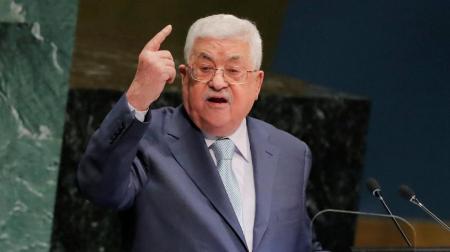 “Jerusalem is not for sale” said Abbas, president of the Palestinian Authority, in a speech to the United Nations General Assembly. “Today I return as this colonial occupation continues to suffocate us, undermining our serious unwavering efforts to build the institutions of our cherished state.” The borders that Abbas demanded Israel recognize are those established during the 1967 Six-Day War, during which Israel gained significant control of the disputed region.

The sharing of Jerusalem, Israeli settlements in the West Bank and the Gaza strip are issues that remain intractable. The border between the Gaza Strip and Israel made international news in March when protesters demanded that Palestinian refugees and their descendants be able to return home. The protests lasted six weeks, and clashes with Israel Defense Forces left more than 100 Palestinians dead.

Abbas reproached the recently passed Israeli “Nation-State Bill” for what he called denying “the connection of the Palestinian people to their historic homeland.”

The law, known formally as “Basic Law: Israel as the Nation-State of the Jewish People,” passed in a close vote by the Israeli Knesset in July. It states that Jewish people alone have the right of self-determination in Israel. It also declares Hebrew as Israel’s official language, the Hebrew calendar as the official calendar and Hebrew law as inspiration for Israeli legislators.

Abbas described the law as leading to “one racist state.” Israeli Prime Minister Benjamin Netanyahu said in a speech that “individual rights are exactly the same and will always remain the same” between Israelis and Palestinians in Israel.

“The shameful (U.N.) resolution comparing Zionism to racism was repealed 25 years ago,” Netanyahu said. “I’m sorry to say that its foul stench still clings to these halls.” Netanyahu went on to condemn the U.N. for accusing and attacking Israel, calling U.N. actions “the same old anti-Semitism with a brand new face.”

The two leaders’ speeches also differed on defining the scope of the Palestinian refugee crisis. Abbas stated that he believes there are 6 million refugees, while Israeli leaders claim just 40,000. The U.N. Relief and Works Agency estimates there are close to 5 million registered Palestinian refugees, including descendants of the original refugees from the 1948 Palestinian war, during which an estimated 85 percent of Palestinians were forced to flee their homes. Original refugee estimates numbered around 700,000 in 1950, and some 30,000 to 50,000 of those individuals are thought to be alive today.

While Netanyahu cited voting rights and parliamentary representation as indicators that Arab Israeli citizens maintain equal rights as Jewish citizens, the contention from the Palestinian side stems more from those who do not have Israeli citizenship, and thus are without these rights. Palestinians point to Israeli settlements in the West Bank and demolitions of Palestinian villages as acts of occupation.

Israelis describe it as “contested territory,” said professor Christian Olsson at Universite Libre de Bruxelles in an interview earlier this year. “But, the fact is that by international legal standards it is quite clearly an occupation, and most of the problematic treatment of Palestinians is linked to that as well,” he said. Palestinians are in many cases being forced out of their homes in the Palestinian territories, but because they are not Israeli citizens they have no voting rights. “It means that you have a democratic state that controls a territory without the population there being able to participate,” Olsson said.

As both leaders continue to ask for both recognition and peace, a solution can only come in the form of compromise. As Abbas said, “An agreement between two sides should be respected by both sides.”