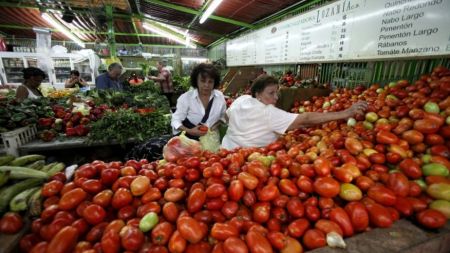 How much does it cost to buy a dozen of eggs in Venezuela? According to the official exchange rate, it will set you back a whopping $150. What’s worse? It is not just the outrageous for basic necessities such as flour and milk, but the terrifying fact that there is no food to buy at all.

Despite waiting hours in the sweltering heat, ordinary people find it increasingly difficult to buy even a small bag of corn flour to make arepas for dinner. Family members have to skip meals and spend at least eight hours just to buy a small pack of goods. “You have masses of people in the streets competing for scarce goods. You’re inevitably going to get conflict, fights, tricks, you name it,” Luis Vicente, president of the polling firm Datanalisis, told IB Times.

In the ramshackle El Valle district of Caracas, 200 people marched on a supermarket guarded by police, shouting, “We want food!” and “Loot it!” Violent riots and lootings have become a common feature in the streets of Venezuela. Starving citizens ransack supermarkets, plunder bakeries and loot food delivery trucks in desperation to feed themselves. Armed guards fire rubber bullets at hungry mobs storming grocery stores to prevent robbing and fighting. There are tragic stories in newspapers every day about young children and women shot to death because of the upheavals.

In June, more than 10 lootings occurred every day and more than a quarter of the 641 protests in May were for food, reported by various human rights groups. “If there is no food, there will be more riots,” said Raibelis Henriquez, 19, who waited all day long for bread in Cumana.

Since oil production is the main generator of revenue, Venezuela suffers greatly from declining global oil prices, and its economy is teetering on the brink of collapse. Meanwhile, the government owes $120 billion to foreign investors and needs to repay about $7 billion this year to avoid a devastating default which may destroy the whole economy.

With less money and more debt to pay, the country is unable to produce or import enough food to feed the population. The current deep economic recession has led to a huge plunge in food imports. In the first half of 2016 compared to the same period last year, bread imports dropped 94 percent, meat 63 percent and fruit 94 percent, according to Panjiva, a global trade analytics firm.

The social turmoil created by the food crisis is an ironic turnaround for a government that prides itself for its social welfare programs such as subsidized food prices. More precisely, the riots and protests are the exact consequences that President Nicolas Maduro tries to avoid. People are now drawing parallels between the current national food crisis and “Caracazo,” or the “Caracas clash,” when low oil prices and surging food prices in 1989 resulted in hundreds of deaths and the election of the current government.

“We’re going to tire of this,” Yubisai Blanco, 40, told Reuters as he grabbed two bags of pasta after standing in line for seven hours. “There will be something like the ‘Caracazo’ for sure.”