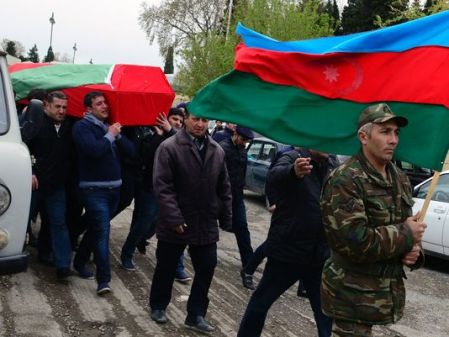 Russian and American leaders expressed doubts this fall about the possibility of a future peace settlement in the Nagorno-Karabakh region, while the Armenia-Azerbaijan cease-fire in the area remained fragile.

Throughout October, Armenian and Azerbaijani officials repeatedly accused each other of breaking the tenuous cease-fire established in April after the Four Day War, the first major conflict in the region since 1994.

Although international leaders intensified efforts to broker a peace deal after the violence this spring, these negotiations deteriorated over the summer months. Currently, Russia and the United States, two key players in the negotiations, are not optimistic about the prospects of a peace deal since the leaders on both sides have few incentives for peace.

Nagorno-Karabakh is a small autonomous region within the borders of Azerbaijan that is connected to Armenia by a narrow corridor. The region is almost entirely ethnically Armenian, although both sides claim to have strong historical and cultural ties to the land. Many Armenians want to claim the Armenian-inhabited land for their country, while many Azerbaijanis feel their nation is incomplete without the region.

Armenia and Azerbaijan have clashed over control of Nagorno-Karabakh since the early 20th century when the Soviets ceded it to Azerbaijan. The Azerbaijanis and Armenians waged a war between 1988 and 1994 over the region that left Armenians in control, although the region is still technically autonomous.

The conflict between the two states remained largely frozen until April of this year, when violence broke out after Azerbaijani troops killed a 12-year-old boy. Dozens of soldiers died before leaders agreed on a new cease-fire, which Azerbaijani and Armenian officials claim the other side has broken multiple times this month.

International actors recognize the potential dangers of the situation, since Armenia is closely allied with Russia and Azerbaijan has ties to Turkey. A full-fledged war between the two nations could create a volatile situation between Russia and the NATO countries.

After the violence this spring, U.S. Secretary of State John Kerry urged leaders to intensify efforts to come to a peace agreement. The United States, Russia and France have led the Minsk Group, an arm of the Organization for Security and Cooperation in Europe, since 1995 to help Armenia and Azerbaijan negotiate a permanent peace agreement.  Their efforts over the years have had mixed success.

In July, Russian Foreign Minister Sergei Lavrov noted that the parties were “much closer now to success than ever before” in reaching a peace deal. However, earlier this month an Azerbaijani news agency reported that Russian presidential aid Yuri Ushakov told reporters Moscow is not optimistic about the prospects of a peace settlement in the near future.

Kerry gave a possible explanation for the lack of progress in negotiations during his remarks Sept. 29 at The Atlantic and Aspen Institute in Washington, D.C. He noted that the Nagorno-Karabakh conflict is an example of a “frozen conflict” where leaders are not ready to settle for peace since the confrontation does not compel them to do so.

“Kerry’s statement on Karabakh was not especially controversial, as the ‘tensions’ that he referred to are mostly pushing in the direction of war, rather than peace,” Joshua Kucera wrote in an analysis for EurasiaNet, a news outlet associated with Columbia University.

“Azerbaijan, suffering increasing public discontent as a result of a struggling economy, was able to rally citizens around the flag by launching an offensive in Karabakh in April, Kucera wrote. “And in Armenia, radical nationalists staged a rebellion over the summer in order to pressure the government from conceding any ground to Azerbaijan over Karabakh.”

With international efforts stymied by domestic pressures in both nations, the U.S. is looking to Armenian and Azerbaijani leadership for a solution. “The responsibility for peace rests on the leaders of both countries, and we would reiterate their importance in finding a negotiated peace,” State Department Press Office Director Elizabeth Trudeau told reporters last month.