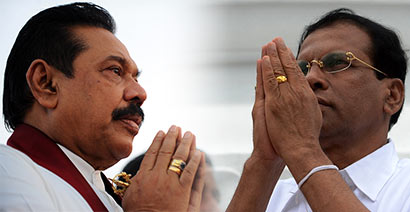 When former President of Sri Lanka Mahinda Rajapakse (above left) was voted out of office in January of this year the country welcomed in what it saw as an era of change and progress under new President Maithripala Sirisena (at right).

Ten months later, however, many are questioning how much progress has actually been made and whether the new president is hiding a world of corruption with the help of his old-time political cronies.

People feel that progress has been slow and that many of the issues that were hoped would be resolved are yet to be addressed. Rajapakse’s authoritarian government covered up and overlooked a number of issues that Sirisena inherited.

Almost a year after Rajapakse’s defeat, there are still hundreds of people in prison who have not been sent to trial or even charged for several years, and numerous disappearances and deaths that occurred during the Rajapakse regime have not been investigated.

Despite gaining the votes of the Tamil people of the war-affected north and east of the country, Sirisena has made no visible moves to reduce the military presence in those regions and it is estimated that there are still approximately 73,700 internally displaced people in the north and east for whom a durable solution to their displacement has yet to be found.

After parliamentary elections in August Sirisena was criticized for giving in to pressures to allow Rajapakse to run for prime minister. Although he did not gain enough support to win the position, Rajapakse managed to secure a position for himself in parliament.

Sirisena may be too close for comfort to the players of the former regime. He made the contentious decision to invite members of the former government, who were voted out in the elections, back into parliament because of their support for him.

He also appointed his brother as the chairman of Sri Lanka’s national telecommunications provider.

Of course the country has seen several positive changes since Sirisena’s induction. His 100-day plan brought about the 19th amendment, which limits the executive powers. This was an encouraging step toward democracy. However, other promises that were made in the 100-day plan have been left unaddressed.

Sirisena’s government has also ostensibly made efforts to dismantle systematic corruption by launching multiple investigations of misappropriation of funds and corruption of members of the former government including Rajapakse and his family members.

The country is now experiencing one of the worst financial crises in its history. It is loaded with crippling debt to the Chinese government. Relations between the two countries have been strained since Rajapakse was replaced earlier this year and Sri Lanka is moving away from its former close ally Beijing, and toward India and the U.S.

There is no doubt that Sirisena’s government is far superior to Rajapakse’s but there is growing disillusionment with the speed at which changes are occurring. Sirisena has to push down on the accelerator soon in order to prove to the people that he will take Sri Lanka forward.