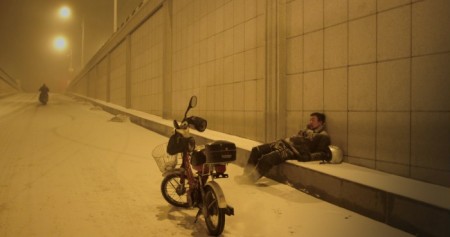 It is set in Heilongjiang province in northeastern China, a frozen industrial backwater and an appropriate location for the subject matter. Snow muffles everything and most scenes are dark, with light – often neon – flitting across the characters’ faces.

The protagonist of “Black Coal” is a detective named Zhang Zili, played by Liao Fan. The film begins at a coal station, where workers find the hand of a murder victim whose body has been scattered across the province – a suitable opening for a film that does not shy away from often-gruesome violence.

Zhang and his partner appear to solve the crime, but similar murders resurface five years later, and they rejoin the case. For Zhang, a drunk whose career and home life fall apart in the intermediary years, the mystery provides an important sense of purpose.

It also leads him to Wu Zhizhen (played by Gwei Lun Mei), the woman who is at the center of the murders. Wu is quiet and cold at first; the defining memory of Gwei’s acting in the film is of her silent and cryptically blank stare, which draws several extended shots even as action swirls around her. Zhang’s pursuit of her becomes the driving purpose of his life, and their relationship develops and becomes increasingly complex.

“Black Coal” paints an unremittingly bleak picture of humanity throughout its course. Zhang may engender sympathy, but he remains a deeply flawed character, and the storyline progresses with acts of depravity and ruthless violence. Zhang’s longtime partner and only friend sums up the mood, cynically laughing at Zhang, “You think anyone wins at life?” Minutes later, the partner is dead, his remains also destined to be scattered across the province.

Driven by Zhang’s character, moments for humor do arise and are most welcome, as they punctuate the grim mood without detracting from it. They often stem from the bleakness: in one scene, a man checks to make sure a drunken and half-frozen Zhang is all right before riding off with his motorcycle. They also break a tension that would otherwise be oppressive, such as with a surreal, minute-long dance solo by Zhang, coming in the middle of his extended confrontation with the murderer.

Diao and cinematographer Dong Jingsong linger with their shots, letting the atmosphere take its full effect, and here the actors and setting really shine. But the plot moves irregularly and suddenly, and a series of twists take on an almost surreal feeling as they occur. In a film this dark, no character is safe, and the unpredictable and ominous plotline makes for tense viewing.  The long, silent, and seemingly emotionless shots that Diao employs would lose viewers in most films, but the character development and atmosphere make them powerful here.

The erratic pace of the plot keeps the audience on edge and necessitates engagement with the mystery, but it also risks leaving one behind at times. Diao doesn’t hold the viewer’s hand, and in doing so, he will undoubtedly frustrate some and draw in others. For those willing to simply enjoy the ride, “Black Coal” offers plenty of excitement to make up for potential confusion. But those more particular about fully understanding plots may find themselves frustrated.

“Black Coal” has a little for everyone to enjoy: it is a thriller and murder mystery at heart, with a plot that makes for a film that is engaging at the surface.  It offers much more for cinephiles and those interested in digging deeper, though skeptical viewers may take issue with a plot that is too ambitious to be gapless. But the movie is ultimately carried by Diao’s excellent job of casting and setting the scene, as both the actors and the atmosphere are perfectly molded for the story at hand.