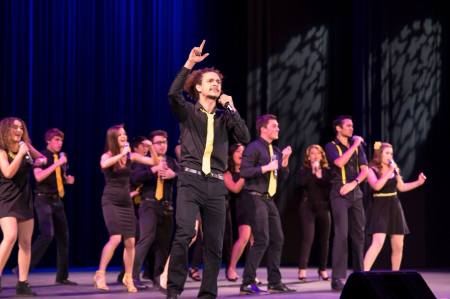 Amit Maor may seem your typical student at Claremont McKenna College. – he studies economics and computer science, loves California and knows where he fits in. Get him up on stage, though, and his skillset comes out: beatboxing.

“I joined an a cappella group when I was a freshman,” recalled Maor, a senior international student from Israel. “Our group didn’t have a beatboxer at the time. I had to learn, quickly, how to hold the beat for my group, which in turn kept our tempo good and helped us with our sound.”

Beatboxing, sometimes known more generally as vocal percussion, is the skillful use of the mouth to replicate sounds made by a regular percussion kit. Common imitations include drum set sounds, such as a kick drum, hi-hat, snare drum or rim shot, as well as effects that replicate turntables, electronic sounds or even regular acoustic instruments.

Maor says he looks up to Kevin Olusola, a musician who plays the cello and beatboxes at the same time.

Maor never really imagined where a capella and beatboxing would take him, describing an a capella festival where he got to beatbox “which was attended by more than 2000 people. It was really exciting and the crowd was incredible.“ He paused, then added with a coy smile, “I even had a small solo section which was cheered loudly.”

Maor described the fun and the value of beatboxing, saying “There’s no limit in terms of how well you can do it. You can always add a new sound, a new feel, or perfect one that you have previously learned.”

With three years of beatbox experience under his belt, Maor looks forward to his final year at CMC. Asked if he gets tired of the same songs or of performing itself, he replies that in beatboxing, he can combine techniques he already knows to produce cool sounds and interesting percussive lines.  “I like that it’s unique, and that people are almost always happy to hear me do it.”

Maor says he counts himself lucky. “Beatboxing reinforces my identity as a musician,” he says, “as well as someone who’s always excited to try new things and increase my ability as a musician and artist.”