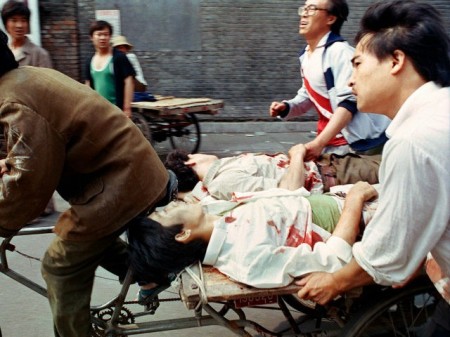 A grim story of carnage emerged as victims from Sunday’s violence in Beijing recalled the People’s Liberation Army shooting, clubbing and even strangling its way through a sea of unarmed protesters.

“A girl in the crowd heard that her younger brother had been killed, and lost her composure and ran toward the soldiers,” a teacher from the Beijing Foreign Languages Institute said.

“We tried to stop her, but the troops opened fire. They shot her seven times, even as she was crawling,” said the teacher, who was treated at Beijing Union Medical College Hospital for a grazed ankle.

The hospital’s overloaded surgery department put patients on dusty hallway floors, some with intravenous drips dangling from makeshift stands, all with bloody bandages.

“A 4-year-old girl was killed by a bullet as she held her mother’s hand,” said a doctor at the hospital, a few blocks from Tiananmen Square. A nurse told of a young worker bicycling to work in the pre-dawn hours who was shot dead in his tracks. “His mother’s upstairs. She can’t stop sobbing,” she said.

Hundreds of pro-democracy protesters and curious bystanders were killed early Sunday as the Chinese army swept through the square to root out students in the third week of a sit-in.

“We have people shot in the head, chest, stomach, legs, even the eyes,” said another nurse as she gave an injection to a 27-year-old student whose lower leg was shattered by a bullet.

“The government is so rotten,” said the student, his shirt drenched with the blood of another youth standing next to him who had a head wound from a bullet. “They don’t care how many people die.”

The student, like the doctors and other victims interviewed, would not let their names be used.

“If they’re so quick to shoot us, what else do you think they would do?” he said.

All those interviewed said troops fired indiscriminately, sometimes in response to jeering protesters, sometimes without provocation.

“As soon as they’d see us they’d shoot,” a young office worker said. “They were shouting, ‘Chong!’ (charge!)”

A 28-year-old woman who works at the Beijing City Office was shot in the back as she fled approaching soldiers. “I just went down to see what all the excitement was. I wasn’t even near the square,” she whispered. “I heard gunfire close by and started running. Then I got hit in the shoulder and collapsed.”

She said two victims on either side of her in the hospital who died before sunrise were quickly replaced by others needing treatment.

“I was lying on a sidewalk to stay out of the street when soldiers beat me with their rifle butts,” a young publishing house employee said. “The guy next to me was shot at close range in his stomach.”

Several patients displayed their X-rays, some showing slugs still lodged in place. All of them implored an American reporter to “report the truth” about the Tiananmen violence.

Outside the hospital, about 100 people clamored for news of missing friends and relatives. One doctor said he handled the body of a man in his mid-20s who had been choked to death by metal chains the soldiers had hidden in their hats for crowd control.

“It’s just repugnant the lengths they went to,” he said.